Biden’s disinformation czar wants “trustworthy, verified people” to be able to edit tweets to provide “context.” I would love to hear “Guest” defend this bullshit. This is the shit that bothers me because while everyone is focused on the current thing the media is bombarding us with, abortion, this stuff just slides by.

Speaking of abortion, why is Merrick Garland getting a pass for not defending the justice’s homes? The fact the justice department is sitting on its hands and the media is fueling protests at justices’ Jones to intimidate them is absurd. There’s already laws against this bullshit, yet for some reason Republicans are trying to odd some new law?


Whoever, with the intent of interfering with, obstructing, or impeding the administration of justice, or with the intent of influencing any judge, juror, witness, or court officer, in the discharge of his duty, pickets or parades in or near a building housing a court of the United States, or in or near a building or residence occupied or used by such judge, juror, witness, or court officer, or with such intent uses any sound-truck or similar device or resorts to any other demonstration in or near any such building or residence, shall be fined under this title or imprisoned not more than one year, or both.

And while all this is going on, the clown show continues with stocks of formula for illegals but none on the shelves:

There’s plenty to worry about here, but time to print some more money for a foreign war
Top

Russia is taping basic GPS systems to the dashboards of Su-34 fighter jets, the UK defence minister said.
Ben Wallace said this was due to "the poor quality" of Russia's own navigation systems.
Russia's military hardware, much of which is outdated, is being tested as the invasion drags on.

Wrecked Russian fighter jets are being found with rudimentary GPS receivers "taped to the dashboards" in Ukraine because their inbuilt navigation systems are so bad, the UK defence minister said.

Speaking at the National Army Museum in London on Monday, Ben Wallace commemorated those who died in World War II and called Russia's invasion of Ukraine "senseless and self-defeating."

Not sure whether it's due to poor quality electronics in the fighter or issues with GLONASS itself.

Corruption. The money allocated for these systems ended up in someone's bank account in Cyprus.
Top

> 1. John you are correct that Putin is trying to dehumanize the
> Ukrainians. Seach his “Victory” Day speech and he does not mention
> “Ukraine.” Not once. They do not exsist in his world, they are
> just bad “Russians” to be brought back in to the fold.

> 2. No mention of the American aid to the Soviet Union.

The new "Ukraine Democracy Defense Lend-Lease Act of 2022," which just
became law, provides American military aid to Ukraine to defeat
Russia. The name "Lend-Lease" was chosen as a signal to Russia that
they're the new Nazis.

In my book on China, I wrote a little bit about the WW II Lend-Lease
program:

> "When war broke out in Europe in September 1939,
> President Franklin D. Roosevelt declared that while the United
> States would remain neutral in law, he could "not ask that every
> American remain neutral in thought as well." Because the American
> public was strongly against entering the war, Roosevelt began
> supplying weapons to Britain in exchange for leases on territory,
> and later on deferred payment terms known as "The Lend-Lease
> program," which would not require payment until after the war.

> Over the course of the war, the United States contracted
> Lend-Lease agreements with more than 30 countries, dispensing some
> $50 billion in assistance. Although British Prime Minister Winston
> Churchill later referred to the initiative as "the most unsordid
> act" one nation had ever done for another, Roosevelt's primary
> motivation was not altruism or disinterested generosity.

> The Lend-Lease program didn't originally apply to China, but in
> 1940-41, Roosevelt formalized U.S. aid to China. The U.S. extended
> credits to the Chinese Government for the purchase of war
> supplies, as it slowly began to tighten restrictions on Japan.
> The United States had been the main supplier of the oil, steel,
> iron, and other commodities needed by the Japanese military in
> China. But in January, 1940, Japan abrogated the existing treaty
> of commerce with the United States. This abrogation gave
> Roosevelt the ability to cut off or restrict the flow of military
> supplies into Japan. After January 1940, the United States
> combined a strategy of increasing aid to China through larger
> credits and the Lend-Lease program with a gradual move towards an
> embargo on the trade of all militarily useful items with Japan.

> In 1940, Japan announced the intention to drive the Western
> imperialist nations from Asia. On September 27, 1940, Japan
> signed the Tripartite Pact with Germany and Italy, making China an
> ally of the West. Then in mid-1941, Japan signed a Neutrality
> Pact with the Soviet Union, freeing Japan's military to move into
> Southeast Asia. A third agreement with Vichy France enabled
> Japanese forces to move into French Indochina and begin their
> Southern Advance. Although negotiations restarted after the
> United States increasingly enforced an embargo against Japan, they
> made little headway. Diplomats in Washington came close to
> agreements on a couple of occasions, but pro-Chinese sentiments in
> the United States made it difficult to reach any resolution that
> would not involve a Japanese withdrawal from China, and such a
> condition was unacceptable to Japan's military leaders. Faced with
> serious shortages as a result of the embargo, unable to retreat,
> and convinced that the U.S. officials opposed further
> negotiations, Japan's leaders came to the conclusion that they had
> to act swiftly. For their part, U.S. leaders had not given up on a
> negotiated settlement, and also doubted that Japan had the
> military strength to attack the U.S. territory. Therefore they
> were stunned when the unthinkable happened and Japanese planes
> bombed the U.S. fleet at Pearl Harbor on December 7, 1941. The
> following day, the United States declared war on Japan, and it
> soon entered into a military alliance with China. When Germany
> stood by its ally and declared war on the United States, the
> Roosevelt Administration faced war in both Europe and
> Asia."

As a separate subject, I've heard two military analysts make the same
recommendation. Since one was on MS-NBC and the other was on Fox
News, it would seem that it's getting serious consideration.

The problem is that Russia is blocking Odessa and other Black Sea
ports, leaving Ukraine as a land-locked nation. This will be
devastating for Ukraine's economy, but it will also be devastating for
a lot of other countries because they depend on Ukraine's wheat
exports, and Ukraine normally produces about 25% of all the world's
wheat exports.

So the recommendation is that American warships should enter the Black
Sea, and begin to escort Ukrainian ships to port. This will not be a
military confrontation with Russia, unless Russia attacks first, which
presumably they'll be reluctant to do.

We'll have to wait and see if this recommendation is pursued.
Top

Hello. It's been a while.

I've been spending the last few days doing additional research on the "Eurasian Heartland" theory, which as I've pointed out many times is the central premise of the geopolitics of the American foreign policy establishment.

For the longest time, I was confused as to why Sir Halford Mackinder (1861-1947) drew the boundaries of the Heartland as he did below back in 1904: 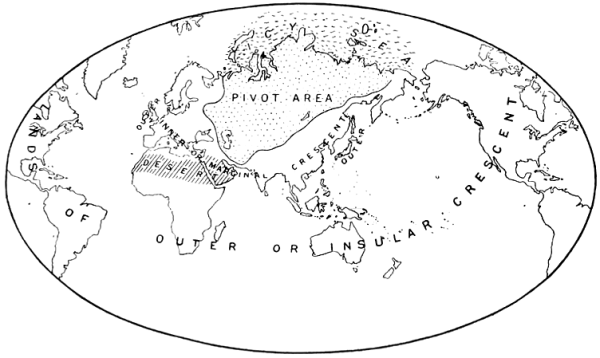 Upon my latest research, I learned that the boundaries are based on... wait for it... drainage basins.

Specifically, the endorheic basins of Central Asia plus all of the Arctic Ocean basin situated in Asia. In other words, the pink area in this map below: 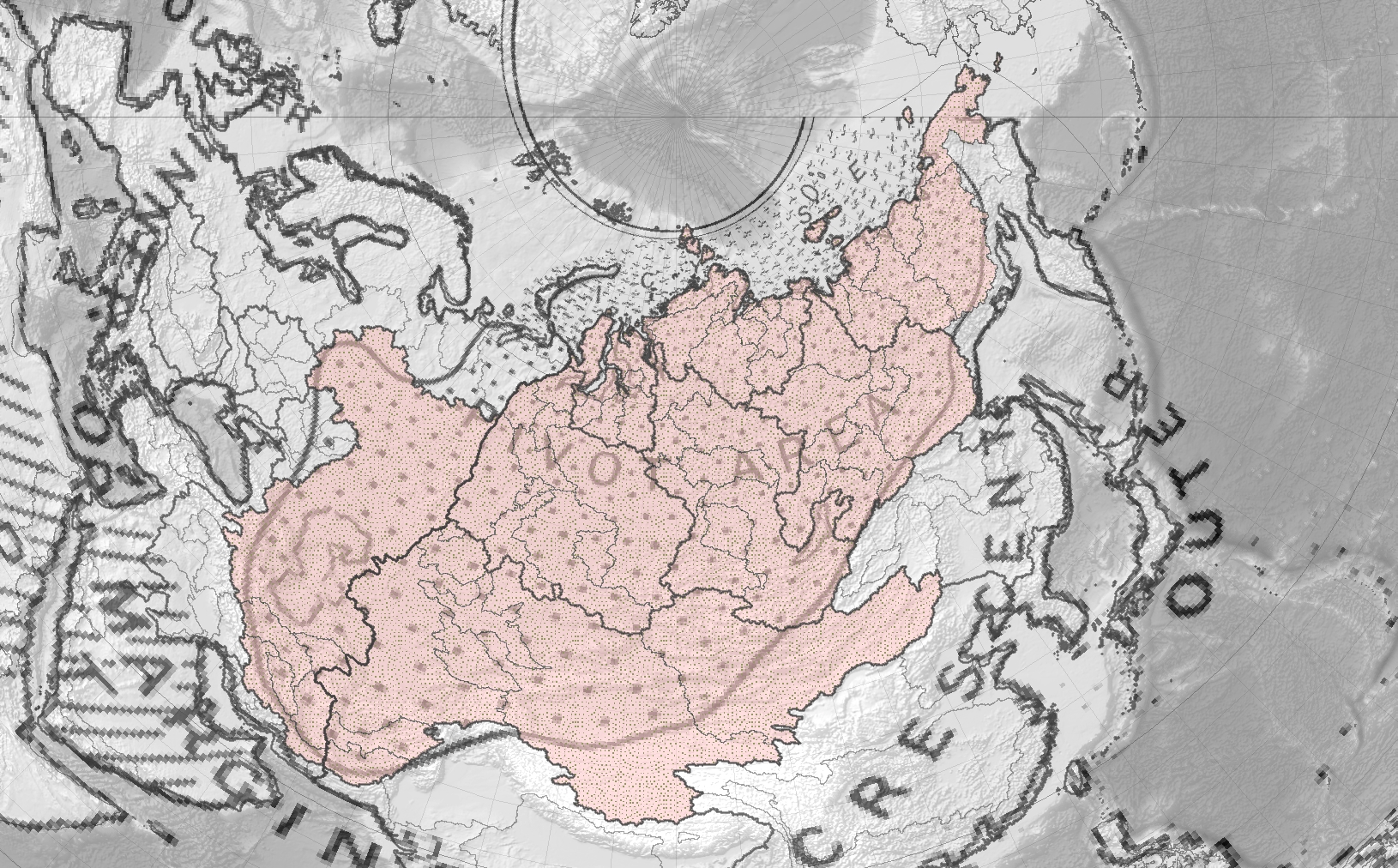 With the help of additional research, I finally did it. I finally determined which countries are supposed to be within the Heartland, with an absolute certainty. There are fifteen of them:

As for which countries are the geopolitical forces in this region, the "major" forces are China and Russia, with Iran, Pakistan, and Turkey being the "minor" forces. Zbigniew Brzezinski (who I've cited frequently in prior discussions on this topic) previously labeled India and Ukraine as additional forces in the region, but upon my most recent research I have concluded that India represents an external geopolitical force as opposed to an internal one, and that Ukraine is not a geopolitical force at all.

To be continued shortly...
Top

Now that we've gotten the "who's who" part of this discussion out of the way, let's move on to the implications of the facts.

With that in mind, I used both land and EEZ boundaries to determine who surrounds the Heartland countries. This is what I got:

As you can see, many countries surround the Heartland. But only four of them are powerful enough to "poke a hole" in it through the use of military force against one of their neighbors. Those four countries are:

On another note, for those who are interested, here are the religious demographics of the Eurasian Heartland.

According to Pew Research, as of 2010 the Heartland's population was:

Is Putin Sick – Or Are We Meant to Think He Is?
https://newlinesmag.com/reportage/is-pu ... ink-he-is/

Russian oligarch claims in secretly-recorded statement that Putin has some kind of blood cancer, and is very ill.

Any one have a realistic estimate of how much NATO weaponry has been placed in Poland in anticipation of this?
Could the conventional (non-nuclear) Russian forces last a week?
Top

Does anyone listen to Jim Rickards on this topic?

He has it correct. The Ukrainians are just sacrificing more people and wasting more money to end with the same result. To do what, get more and more free cash from the stupid/bought American pols? Proving the point. It's always been a NATO proxy war and slush fund for puppets like Zelensky. Just disgusting.
Top
Post Reply
10156 posts

Users browsing this forum: No registered users and 30 guests