The link is rather broad. I would have preferred a specific story.

What kind of 'shoe' are you thinking of?
Top

"the other shoe" is obviously a mirror image of the first shoe ...and to which AC Clarke story are you referring?...Childhood's End?
Top

shoshin wrote:"the other shoe" is obviously a mirror image of the first shoe ...and to which AC Clarke story are you referring?...Childhood's End?

If a tree falls in the forest, and... 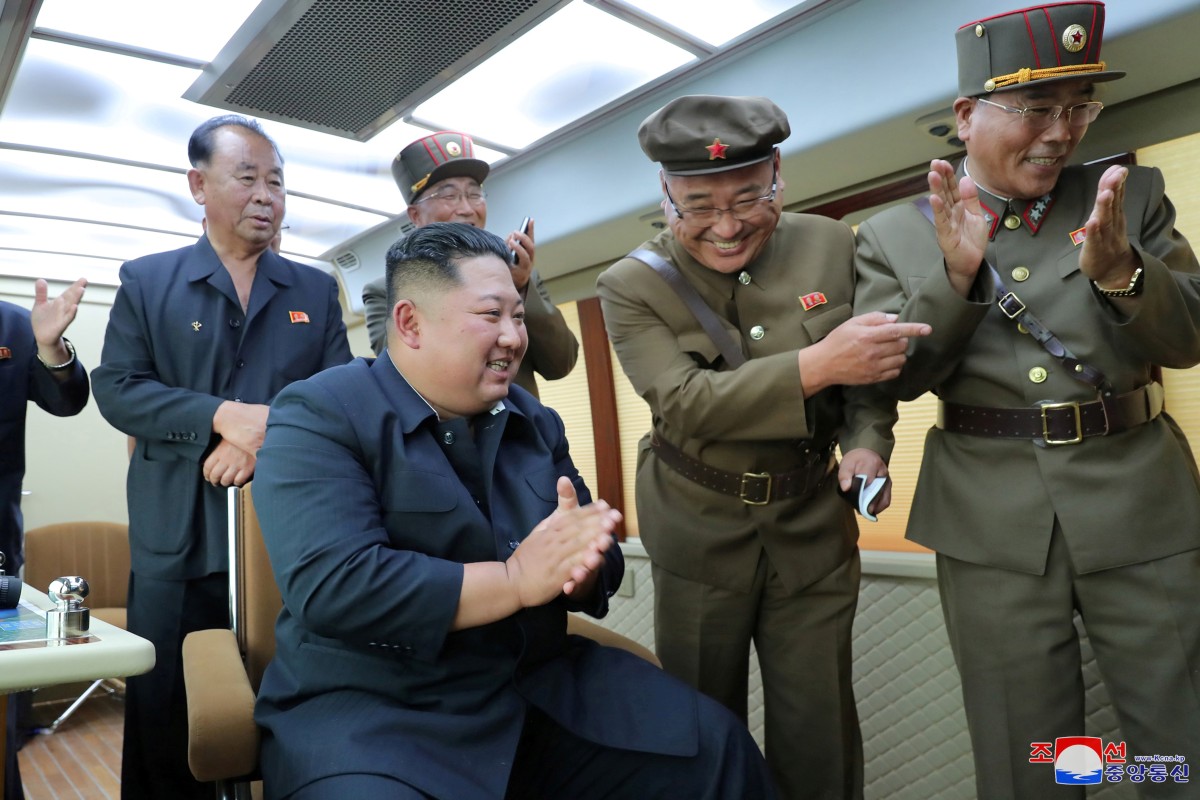 North Korea launched test firings of an unspecified new weapon on
Saturday. Child dictator Kim Jong-un expressed “great satisfaction”
over his military’s “mysterious and amazing success rates” in recent
testing activity and vowed to build up “invincible military
capabilities no one dare provoke." This is the sixth round of
projectile launches since late July.

Donald Trump has downplayed the significance of these missile
launches, pointing out these are short-range missiles, and do not
violate Kim's agreement with Trump not to test nuclear weapons or
long-range ballistic missiles.

One analyst said that Kim is getting frustrated because these
projectile launches are not causing the international news panic that
he's enjoyed in the past, and the "blame" for that is Trump's
downplaying the tests.

South Korea's President Moon Jae-in called for Korean unification by
2045 and called for North Korea to choose "economic prosperity over
its nuclear program."

A North Korean official ridiculed Moon's remarks, and said that "the
boiled head of a cow would fall into a side-splitting laughter."

There were hundreds of thousands of protesters in Hong Kong on Sunday,
despite the pouring rain. The protests were peaceful, giving rise to
hopes that the protests would fizzle out in time for China's big
independence day celebrations on October 1.

For this, I would quote the Greek philosopher Aristotle (384-322 BC):
"One swallow does not a summer make, nor one fine day; similarly one
day or brief time of happiness does not make a person entirely happy."

But pro-democracy protesters in Hong Kong threatened further
unrest unless the government meets their demands -- now.

India is lifting some restrictions in the India-governed portion
of Kashmir. Some phone service has been restored, and some schools
have reopened, but much of the area is still in lockdown.

The Pakistani people seem to be pretty furious about what India did
-- revoking Article 370, taking away Kashmir's special privileges.
Prime minister Imran Khan is using diplomatic threats against
India to cool the anger in Pakistan, but it's hard to predict
where this is going to go.

Dozens of people were killed on Saturday evening by an explosion in
Kabul, the capital city of Afghanistan. The explosion attacked a Shia
Hazara wedding. Ethnic Hazaras, and other Shia groups, are often
targeted by jihadist groups in Afghanistan and Pakistan.

As usual, a terror attack by ISIS does not mean that a bunch
of ISIS thugs in Syria packed their bags and came to Kabul to
blow up a wedding. What's happening is that some jihadist
groups in Afghanistan are claiming allegiance with ISIS rather
than with al-Qaeda. It's possible that the ISIS groups are
a younger generation, breaking away from the older generations
in Taliban. One analyst suggested that the ISIS groups came
from Tehrik-e-Taliban (TTP), the Pakistan Taliban, which has
had differences with the Afghan Taliban.

Trump wants to withdraw all US troops from Afghanistan, and so the US
is negotiating with the Taliban, where the US will withdraw its troops
and the Taliban will promise to be nice.

That's about as laughable as anything else going on today.
However, the "peace talks" may be derailed by ISIS attacks.
Top

John, Thanks for the update on the Hazaras in Afghanistan. When I was dealing with the Afghan National Army (ANA) we had to be very careful on the tribal/ethnic make up of squads and platoons and who was a leader of each. Sometimes it was bad. There is a lot of animosity between the tribes that go back generations. The Pashtuns gave the Hazara a bad time due to some had diffuculty growing a beard due to their DNA. Also many Pashtuns feel Afghanistan is theirs and all other ethnic groups are second class citizens. I found out that some Pashtuns said that it was a sign of masculinity to grow a beard and mustaches and some Hazara had a time hard to do, due to DNA. So they were bullied. In turn the Hazara became the some of the best scouts or recon commandos since they were motivated to go after the al Qaeda and especially the Taliban, since the Taliban is mostly Pashtun, the same ethnic group of their bullies. It was really double since the Hazaras are also Shia and the Pashtuns are Sunni. Simply it is a lot of bad blood between the two groups, it will take a lot of time and effort to heal the rift between and most likely not in our lifetimes.

ISIS is just throwing more gas on the fire. If ISIS persist in Afghanistan, I can see the Taliban become Americas BFF. Everybody hates ISIS. Stranger things have happened.
Top

shoshin wrote:"the other shoe" is obviously a mirror image of the first shoe ...and to which AC Clarke story are you referring?...Childhood's End?

I have no idea what "the other shoe is a mirror image of the first shoe" means, but that's fine. I was just curious what the original poster meant by "the other shoe".

And Childhood's End was the Clarke piece that I was referring to, as getting "help" from a super-duper advanced, relatively speaking, entity can be a dangerous "bargain".

..and China's "All your base are belong to us!" attitude proves that out pretty well.

..which ironically was a Japanese phrase: 連邦政府れんぽうせいふ軍ぐんのご協力きょうりょくにより、君達きみたちの基地きちは、全すべてCATSがいただいた。
Top


FishbellykanakaDude wrote: > I have no idea what "the other shoe is a mirror image of the first
> shoe" means, but that's fine.

Users browsing this forum: No registered users and 18 guests