The following non-nuclear countries also have active uranium enrichment facilities, but currently do not possess any highly-enriched uranium:
Argentina
Brazil

The following non-nuclear countries have neither active uranium enrichment facilities nor possess any highly-enriched uranium, but do participate in a nuclear weapons "sharing" program** with a nuclear country:
Saudi Arabia**
Turkey

A "MAP" VERSION OF THE ABOVE TWO POSTS: 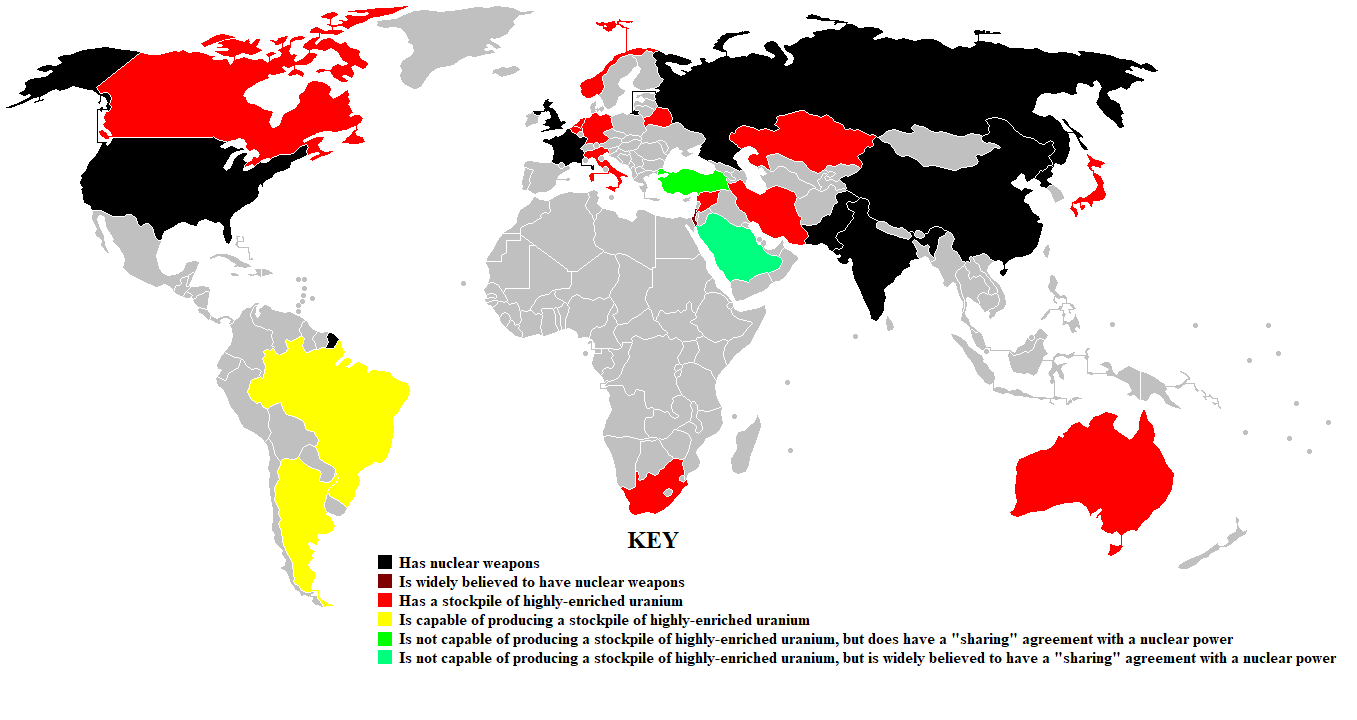 
Cool Breeze wrote: ↑
Mon Jul 19, 2021 7:17 pm
> Good questions. There are definite similarities, and decadence and
> decay in general are part of these things - you are correct.

> What I think you do not deny in this vein, however, is that the
> world is increasingly smaller in the sense of globalism and
> manipulation through tech - and you yourself also are claiming the
> exponential advance of technology in general. I think it is smart
> to keep in mind that humans are the same and therefore things do
> rhyme - I accept and agree - but I'm pointing out that it is
> remarkably different right now for mostly tech and war potential,
> moving ahead.

> What's more, sovereign world debt in this spirit of the age is
> totally corrupt and there isn't much balance; mostly everyone is
> doing the same thing. The switch to fiat currencies, something
> that is NEW historically (yes this time it is different) has a
> logical conclusion [I'd actually argue an inevitability] in a one
> world gov't / fiat system.

What you're advocating is a universally accepted view that I almost
totally disagree with. The core events -- wars, refugees, poverty,
financial crises -- are the same throughout history, with only changes
in irrelevant details.

Let's take your "sovereign world debt" example. Are you kidding me?
You've heard of Tulipomania, haven't you? At its peak, the price of a
tulip equalled the price of a small house. Talk about inflation!

So there was no technology then, but there's lots of technology today.
But what do the two eras have in common that will result in a
financial crash today that is like the financial crash of 1637? The
answer is securitization of debt.

I don't know why people don't understand this, but fiat currencies are
completely irrelevant, because anyone -- ANYONE -- can create money by
means of securitization of debt.

Person C believes that you're going to be rich and convinces person D
that your IOU is really worth $200, and sells it to him for $200.

Question: How much money do I have?

In today's world, there are hundreds of trillions of dollars in the
world mostly in the form of securities. In 1637, there were huge
amounts of money floating around in the form of "tulip futures":
certificates that could be exchanged for a tulip to be grown the
following spring. This came to be known as windhandel (the
wind trade), because the tulip bulbs were never delivered and the
money was never paid. The financial collapse led directly into the 30
years war.


The sovereign debt example went on longer than I expected, so I'll
just summarize the other examples.

I just wrote an article on the crisis in Lebanon, and the crisis is
due entirely to the conflicts between Sunni Muslims, Shia Muslims, and
Maronite Christians -- and these differences go back centuries and
have nothing to do with technology.

I just wrote an article on South Africa, and the crisis is caused by
tribal differences between Zulus, Xhosa, Venda and other tribes, which
has nothing to do with technology, and may result in a repeat of the
Mfecane.

The Chinese and Japanese people vitriolically hate each other. That's
been true for centuries, and has nothing to do with technology.

In summary, technology has nothing to do with what's important in the
world today.

I agree with John. I just finished reading Josephus' account of the Jewish war with the Romans that culminated in the destruction of Jerusalem (and the death of over 1 million of its inhabitants). When the time comes, technology won't matter. Each side will do its best to neutralize the other's technology. Whoever is most successful at that, wins.

What's interesting is that the Roman rulers were relatively friendly with the Jewish rulers... until they weren't. Obviously, the story is much more complex, but the point is that, when a Generational Crisis War occurs the only thing that matters is winning.
Top

The article below, written in 2018, is a far-left analysis of Japan's
plutonium inventory. It's highly hostile to Japan, and completely
ignores Japan's self-defense needs and its need to support Taiwan in
case of a Chinese invasion. Nonetheless, it's a very interesting
discussion of the history of Japan's plutonium stock, and current
status:


> "The JAEC has correctly identified the problem but not
> the solution. The surplus 47 metric tons of plutonium is
> sufficient to make more than 5,000 nuclear weapons. Japan is now
> the only country without such weapons that reprocesses its spent
> nuclear fuel, creating still more plutonium. Japan even plans to
> start commercial operation in 2021 of a domestic reprocessing
> plant that would produce up to an additional eight metric tons of
> plutonium annually.

> All this creates the impression internationally that Japan is
> preserving the option to quickly produce a large nuclear weapons
> arsenal. Not surprisingly, South Korea, North Korea, and China
> have cited Japan’s plutonium stockpile as grounds to initiate or
> expand their own reprocessing of nuclear fuel, thereby raising the
> specter of a disastrous nuclear arms race in East
> Asia."

Yesterday 7/20/2021 three dams failed in China in a 48 hour time span. If you go to a twitter account called " things China doesn't want you to know" they have video of at least one dam failing and videos of the devastation and of other failures in Chinese infrastructure. They also had a couple of videos that supposedly show movements of heavy military hardware including tanks within China. The military hardware was being moved to the coast that runs along the straits that separate China from Taiwan. It looks like China is going to make it's move on Taiwan sooner rather than later.
China has had a large weather modification program for over a decade and some people are saying that this is the reason why they have had the flooding issues of last year which threatened the 3 gorges dam and the issues that took out the 3 dams yesterday. I have noticed that China is sometimes like a kid playing with dynamite and because they like to do things on a large scale when things go wrong it's catastrophic.
Top

I'm amazed Twiiter hasn't taken that down, given how willing they are to do China's bidding. Funny how those happy to proclaim "Black Lives Matter" stay silent about far worse human rights abuses.
Top

Japan says 'F--k you China, bring it on'

China is now threatening to nuke Japan repeatedly if it intervenes in Taiwan in any way, shape, or form? Wow, just wow. This makes the neocons here in the US look sane by comparison.

Oh, and I absolutely would support going to war with China in such a scenario, given that Japan directly borders us and thus is part of our backyard.

Considering that this is coming from me, it should say a lot.
Top
Post Reply
7194 posts